At work over the weekend, a gypsy lady stopped me in my tracks, took hold of my shoulders and told me,

All your bad luck is behind you. Everything that has pained, stressed and made you scared is behind you. You have only good things ahead in your stars.

So, after being mildly bemused for a while, I took it to be a good thing and entered into the next week full of hope and enthusiasm. After all, last week had felt and been so positive.

Can you sense where this is going…?

The first issue was our new plasterers. Also known as the disaster squad. Our brilliant team from CEC Plastering were fully booked up and therefore could only commit to the shop.

So on a recommendation, we hired Nick Stanley Plastering, and his son Nick…and his TWO (useless) labourers. They told us the four of them could get the whole place done in 4 days and so we agreed to have them all on board with the promise the work would get done.

If it hadn’t been for the fact that our plumbers were booked for the following week, I’d have fired them after day one…no correction; midway through day one. However, we needed to get the plumbers in to fit the bathroom as their schedule was also getting pretty full and we couldn’t afford to loose our “slot”. So I took a breath. Seb took a breath.

Lets just get the bathroom done. Then we can fire them…

We needed to pick up some more materials for the plasterers and seeing the slow pace they were taking with the bathroom, we decided not to trust them to go to the shop and come back in a timely manner. We said we’d go and be back in an hour.In that time, they’d moved on from the bathroom and into the kitchen. Please note; this doesn’t mean they’d FINISHED the bathroom! They just decided…to start in another room? It’s like they knew they were going to get fired…

9 cigarette breaks later, I started to loose my temper. Seb told them where to focus a further 9 times and they FINALLY (on day 3) got it done… (not the rest of the flat)

Done to THEIR standard. Certainly not done to ours or our plumbers. A heated debate and a lot of stress later, Seb told them not to come back as kindly as he could and I was really proud of how he handled it because I was ready to kill!

Our plumbers very kindly offered to finish the bathroom and recommended someone else we could call in to do the rest. We wait with baited breath on that one…

As I’ve mentioned, I’ve been pretty poorly all year and I had reached my limit. Seb had also started to look like he was carrying the world on his shoulders and suitcases under his eyes. He desperately needed a day off, and I desperately needed to get back in front of a doctor. So we took a day off. Left the shop to the charge of the plumbers and went to Birmingham on a stock run. I know right! We know how to use our downtime well!

The next drama was of course the bathroom floor. Even though the carpenter had laid a new floor, the floor was even but not level. So our bathroom was basically on a major wonk! The plumbers spent the best part of a day, pulling up the newly laid floor (eyes well up), levelling the floor with CLS and laying the floor which also, incidentally, needed 6mm ply over it anyway for the tiles to be able to take the flex of the floor without cracking.

Our bath arrived. It wasn’t the one we ordered. Our kitchen tap arrived. The thread was too short for the granit. The tiles arrived. Yet couldn’t be used in a shower which they did NOT tell us when we bought them. Our Freshly plastered ceiling cracked. Our other freshly plastered ceiling bowed. Our list of drama seemed to grow and grow and honestly, by the end of the week I wanted to close the door and leave for a really, really, really long time!

When at last the plumbers were able to start tiling the bathroom, 3 days behind schedule, I finally exhaled. Seb kept them sweet with a few beers on Friday night and they offered to come in on Sunday to try to catch up time. 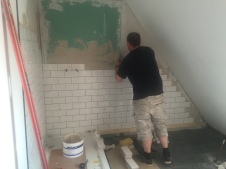 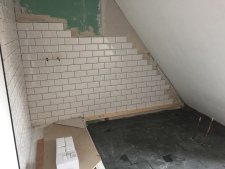 Of course, it wasn’t going to be that simple. Despite all their hard work, when I walked in this morning to look at the areas they had managed to grout. I immediately noticed our new tiles were every so lightly scratched.

When I called them, they rushed round and were mortified to see what I was seeing. Sadly, the electrics in the house are off and they simply hadn’t seen the scratches when they were tiling late. So… off they had to come. OUR NEWLY TILED BATHROOM! Once again without tiles.

It certainly doesn’t feel like all my bad luck is behind me. In fact, this has been the worst two weeks we’ve had! So… I think that witch jinxed me. Needless to say; we didn’t open this weekend…

Take two from tomorrow apparently… But don’t wish us luck. I’m no longer a believer.

4 thoughts on “It was NOT written in the stars…”

There was an error retrieving images from Instagram. An attempt will be remade in a few minutes.